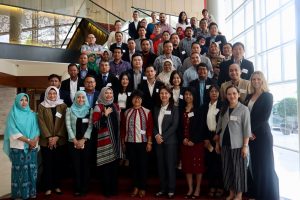 The final of three ASEAN-Australia Digital Trade Standards Initiative workshops was concluded in Jakarta this week.

As a continuation of the ASEAN-Australia Digital Trade Standards Initiative launched in March 2018, the objective of these workshops is to support digital trade standards and promote effective standardisation practices across ASEAN Member States.

The initiative is being led by Standards Australia but includes collaboration and support from ISO, IEC and other international partners. ASEAN Member States were also supported to attend the PASC Annual General Meeting in Wellington, New Zealand in April 2019 and the ISO Workshop: Disruptive technologies and new service models: the role of International Standards in Singapore in June 2019.

To maintain the momentum on this initiative a subsequent phase is currently being finalised for 2020.

The upcoming PASC EC 64 meeting will be held on Monday 16 September alongside the ISO General Assembly 2019 in Cape Town, South Africa.

Meeting documents and logistical information is being provided directly by the PASC Secretariat.

More information on the ISO General Assembly can be found on the ISO Week 2019 website.

Services constitute the largest sector in the global economy today, accounting for 70 % of global GDP, 60 % of global employment and 46 % of global exports measured in value-added terms.

But this sector is not just growing, it is evolving – rapid advances in technology are leading to significant changes in service business models and service provision methods. Faced with these potentially disruptive changes, International Standards offer businesses, governments and consumers tools to create trust, ensure the quality and safety of services, and facilitate their provision across borders.

ISO is hosting a workshop which will focus on how International Standards for services can enable new technologies and business models in the services sector, concentrating on areas such as artificial intelligence and Big Data, e-commerce, cybersecurity, and blockchain. Standardizers, policymakers and industry representatives will come together to discuss the benefits of standards, how they can be effectively implemented, and potential new areas of standardization in the services sector.

The Standards and Regulatory Stewardship Workshop is co-organized by the Pacific Area Standards Congress (PASC) and the International Organization for Standardization (ISO). It is taking place as part of the PASC Annual General Meeting, held in Wellington, New Zealand from 8-11 April 2019.

The final program for the workshop is now available for all attendees and interested parties.

The aim of this workshop is to bring together standards bodies, regulators and other stakeholders, to discuss how standards can be used to support good regulatory policy and practice, in general, and regulatory stewardship, in particular.

Mr Richard Brooks, Chairman of the Standards Australia Board thanked Dr Evans for her significant contributions during her time as Chief Executive.

“Bronwyn has been CEO through an exciting time of transformation for Standards Australia. We have benefited greatly from Bronwyn’s leadership of the team.

“As we reflected on what has been achieved in recent years, and what lies ahead through 2019 and beyond we are pleased to be able to say that she is leaving a legacy of substance, and excellent executive and senior leadership teams in place.”

Dr Evans thanked the Board for its support through her tenure.

In speaking to staff, Dr Evans recounted the value of the work being done by Standards Australia both nationally and internationally and its impact on the quality of Australian life.

“It has been a great privilege to lead this wonderful organisation – the Executive, Senior Leadership team and staff at every level are outstanding and all passionately committed to Standards Australia. I am proud of what we have achieved in so many aspects of our work. Standards Australia is in a great position with so much opportunity, goodwill and ambitions for the next phase of growth. I look forward to seeing Standards Australia move from strength to strength.”

Dr Evans will be continuing with a number of roles including as a Director of the Australia Japan Foundation and as a Director of the Digital Health Cooperative Research Centre.  Dr Evans has also resigned as the ISO Vice President of Finance and IEC Australian National Committee Secretary.

Deputy CEO Adrian O’Connell commenced as Acting Chief Executive Officer from 4 March 2019 and will remain Acting CEO until the appointment of a new Chief Executive.

Realising the potential of digital trade across Australia and the South East Asia region is the focus of a Recommendations Report released today by Standards Australia.

The report is part of the ASEAN – Australia Digital Trade Standards Cooperation Initiative.

The ten key recommendations in the report focus on utilising International Standards as a means to increase economic integration and digital trade in the ASEAN-Australia region.

“Through close collaboration with ASEAN, there is now a much better understanding of the challenges in the region and how standards can help provide a solution,” said Dr Bronwyn Evans, CEO of Standards Australia.

“The Recommendations Report maps out mechanisms for increasing the awareness, participation, adoption and use of international standards to ultimately support digital trade in all eleven of the countries involved.”

The Recommendations Report has been presented to the Australian Government and the Governments of ASEAN nations, for their consideration in progressing a second phase of the ASEAN-Australia Digital Trade Standards Cooperation Initiative.

As the PASC 42 AGM will be held in the month of April next year, your early registration would be greatly appreciated.

Should you have any enquiries on the event registration, please feel free to contact PASC Secretariat or PASC AGM host/SNZ’s contact, Ms Carmen Mak at Carmen.Mak@mbie.govt.nz. The Honourable Navdeep Bains, Minister of Innovation, Science and Economic Development, and Minister responsible for the Standards Council of Canada (SCC), has appointed Chantal Guay as the new Chief Executive Officer (CEO) of SCC (link is external) effective on April 16, 2018.

Since August 2017, Ms. Guay has held the position of Vice-President of Standards & International Relations at SCC, and was responsible for the organization’s national and international standards development programs. Ms. Guay has been the Canadian member representative to the International Organization for Standardization’s Conformity Assessment Chairman’s Policy and Coordination Group (CASCO CPC).

Prior to joining SCC, Ms. Guay was Chief Executive Officer of Engineers Canada, the national organization comprised of the 12 provincial and territorial associations that regulate the practice of engineering in Canada, and that license the country’s more than 290,000 professional engineers.

“The work of the Standards Council of Canada is essential to increasing innovation and enhancing Canada’s economic competitiveness and social well-being through standardization solutions. I welcome Ms. Guay to her role as CEO of SCC and know that her years of experience within the organization will serve her well.”

“I am delighted to begin my new role as Chief Executive Officer of the Standards Council of Canada and excited to continue our important work to support the government’s innovation and trade priorities. I am particularly interested in enhancing our collaboration with stakeholders to ensure that more standardization solutions are available for the benefit of Canadian governments, industry and consumers. Engaging more Canadians to participate in the development of standards will be a key part of our success.”

SCC is a Crown corporation and part of the Innovation, Science and Economic Development portfolio. SCC leads and facilitates the development and use of national and international standards to enhance Canada’s economic competitiveness and social well-being through innovative standardization solutions. In addition, SCC coordinates the efforts of Canadians in the development and use of standards and delivers accreditation services to customers. To support this project, the ASEAN-Australia Digital Trade Standards Survey has been developed to assess the ASEAN region’s digital readiness and the current utilisation of national and international standards. It aims to determine areas of opportunity for digital standards harmonisation, technical alignment, regulatory coherence, and policy cooperation and also uncover knowledge and participation gaps across the digital trade sphere.

Standards Australia encourages all ASEAN members of PASC to contribute to the survey. ASEAN and Australia are grateful for all inputs – from an individual, organisation or state level.